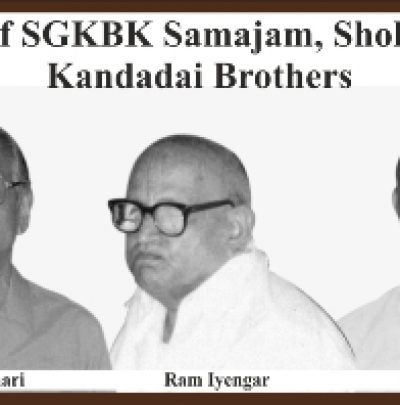 Kondapalayam near the town of Sholinghur in Vellore District of Tamil Nadu (South India) is the abode of the 95th Divyadesam (one among 108 holiest Sri Vaishnava pilgrimage spots) dedicated to Sri Yoga Narasimha Swamy, his consort Amirthaphalavalli Thaayar & Sri Yoga Anchaneya Swamy who reside on two hill top temples called Periya Malai and Chinna Malai respectively. The Tamil month of Karthikai starts in the middle of November every year and is considered the most sacred month for worshiping the above deities. Thousands of pilgrims visit Sholinghur during this period especially on weekends as it is only 120 KM from Chennai and about 260 KM from Bengaluru with reasonably easy access by train or bus.

Whilst the number of pilgrims had increased vastly since Independence, the town of Sholinghur and Kondapalayam in particular did not have adequate facilities for food and shelter. In 1987, Sriman Kandadai brothers hailing from Nellore in Andhra Pradesh decided to start Thadiyarathanai (Annadhanam) at a rented premises (Guruswamy Bungalow) to serve the pilgrims. In 1999, a trust was formed in the name of Sri Ghatikachala Kshetra Bhakthajana Kainkarya (SGKBK) Samajam to streamline the activities of Samajam to better serve devotees visiting the holy shrines at Sholinghur/Kondapalayam.

Today the sons, nephews and other friends/relatives of Kandadai Brothers are carrying on the proud tradition by successfully conducting the Thadiyarathanai for more than 25 years. This would not have been possible without the generous donation of time and money from donors, volunteers & well wishers and only with the blessings of Lord Sri Yoga Narasimha Swamy.

To realize the dreams of founders, SGKBK Samajam moved into its own premises in 2013 constructing a building comprising of Thadiyarathanai hall, kitchen, store room, rest rooms etc. at a cost of around Rs. 50 Lakhs. Construction started in January 2013 and was completed by November 2013 in time for the Thathiyarathai at own premises. The Samajam is in need of funds to manage the Thathiyarathai activities during Karthigai month (Nov/Dec). Please visit Building Status page for more information and photographs.

We request our well wishers/devotees to contribute generously to this noble cause. You can contribute by cheque, Money Order, Credit Card, Paypal etc. Please visit Donate page for Bank and credit card/payment details. Corpus (Building Fund) donations are exempted from Income Tax under Section 80G of I.T. Act.

Sri Ramanuja developed the system of thought of Sri Vaishnavism religion and to propagate it, he appointed 74 Simhasanadhipathis. The foremost among the Simhasanadhipathis was Sri Mudali Andan, his nephew. Sri Mudali Andan was born in Pachhai Vaarana Perumal Sannadhi (now referred to as Nazarethpet near Poonamallee today) to Sri Ananthanarayana Dikshithar and Nachiaramman (elder of Sri Ramanuja’s two sisters) in the year 1033 CE on the Chaithra Punarvasu Nakshatra day and was named as Dasarathi. Ramanuja had a very intimate attachment for Dasarathi and even at the time when he embraced Sanyasasrama, he renounced everything except Dasarathi. Sri Mudali Andan is also referred to as the Ramanuja-Paduka or Yatiraja-Paduka. This honorofic is cited in the ‘taniyan’ of Sri Mudali Andan which goes:

Mudali Andan and his wife were blessed with six daughters but no male heir to continue the kainkaryam. Ramanuja had gotten the six daughters of Mudali Andan married to the sons of Mudumbai Nambi, Mudembai Ammal, Asuri Perumal, Kidambi Perumal, Komandur Ilayavalli Aachan & Vanghipurathu Nambi respectively. All the above were among the 74 Simhasanathipathis appointed by Ramanuja for growth of Vaishnava religion.

Once when the couple was in a conversation with Ramanuja, a devotee arrived with prasadam for Ramanuja from Lord Ranganatha’s Temple in Srirangam. The pot of prasadam was covered with a torn piece of cloth that was once part of the Lord’s own clothing. Seeing this cherished piece of cloth, Ramanuja immediately bestowed it upon the couple. In due time, Mudali Andan and his wife were blessed with a son, whom at birth, was placed in the very same torn piece of cloth, “Kandadai,” which had served as a sign of the Lord’s benediction. Thus, Mudali Andan vamsam (family) was called Kandadayar family. This boy soon became known as Kandadai Andan. His descendants, who belong to the lineage of the 74 Simhasanadhipatis, now proudly proclaim Koil Kandadai or Kandadai as their family name.

Mudali Andan Lived for 103 Thirunakshatrams and attained Lord’s feet in the year 1136 CE. At that time Kandadai Andan was only 28 years old. Like Sri Ramanuja, Kandadai Andan had three acharyas – Sri Ramanuja, Swami Mudali Andan and Atkonda Villi Jeeyar. After his father attained Lord’s Lotus feet. Yathirajar consoled him, took him to Ramanuja’s Sannadhi and gave him the duties and responsibilities performed by his father Mudali Andan. 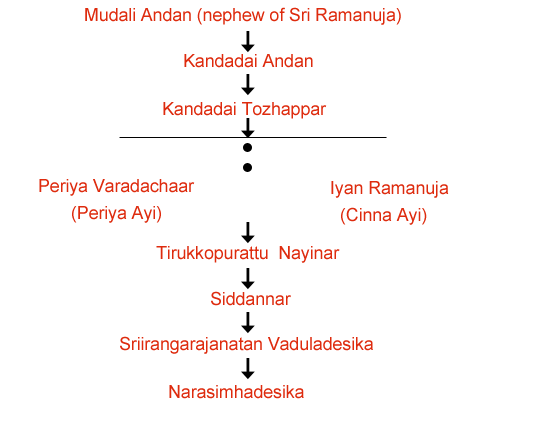 It is said that North Mada street in Srivilliputhur bears the name ‘kandadaiyarvithi’, to signify the importance of the family. Kandadai families have the renown of being one of only three families that receive Acharya Sripada Teertham three times, rather than twice.